Martello Towers are one of the most recognizable fortresses of the British Empire. They originated from one of the oldest techniques in the book, copy what someone else does. Martello towers were based on the tower at Mortella Point on Corsica. Two RN warships, one a 74, had unsuccessfully attacked the small tower, at the job had to be given to a land based force, for the towers guns faced only seaward. The British, never missing an opportunity to steal someone else's innovation, decided to copy the design of the tower across the Empire.

Several hundred Martello towers were constructed all over the world, though many were never used, as Europe enjoyed a lasting peace after the defeat of Napoleon. The towers were circular in construction, with thick sloping walls, allowing them to stop most calibers until the introduction of rifled artillery. The tower was garrisoned by around 25 men and one officer, and was meant to be a completely self sufficient fortress in the event of attack. The entrance to the tower was through a ladder onto the second floor, it could be retracted quickly, denying easy entrance to the tower.  The towers had one gun on the roof, rotating around a revolving frame to allow 360 degree coverage of the surrounding area. 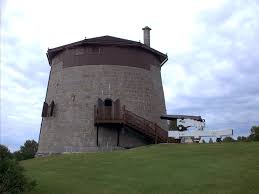