The Battle Of Quatre Bras

Quatre Bras lies not far from Brussels. It refers to the crossroads of the Nivelles-Namur road. The name means "four corners" in french. In 1815, this crossroads was the most important in Europe

For the advancing French army, Quatre Bras was a sword pointed straight at the heart of Belgium; if Quatre Bras could be taken, the Anglo-Dutch and Prussian armies could not unite. These armies could then be defeated separately by the might of Napoleon's Armée du Nord. And this crossroads was ripe for the picking. The garrison for the hugely important strand of the web to catch Napoleon was only one brigade strong, two regiments from Nassau. Wellington ordered the rest of the army to concentrate on Nivelles and...wait. The Prince of Orange, or more precisely his Chief of Staff, Rebecque, violated this order and reinforced the brigade at Quatre Bras with more units from the Prince's First Corps. 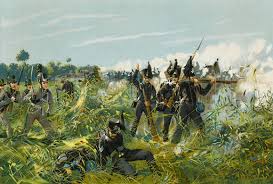 The garrison of the crossroads arrived just before the French advance scouts. The original single brigade, which was quickly reinforced by another, fought well, retreating to a wooded area near the crossroads, smashing each French charge with volleys from the infantry and canister from the few guns they had brought along. Around two hours later, fresh Allied units started arriving, outpacing the French rate of deployment.

In these first few hours, the French outnumbered the allies, and they made several pushes at the woods near the crossroads and at the walled farm of Gemioncourt. Each time they held, though the Allies suffered dearly, the Dutch unit holding Gemioncourt lost 62% of its manpower. Once the allies began arriving in force, they tried their own cavalry charges at the French, one personally led by the Duke of Brunswick, who lost his life in among the French skirmishers. He was just one of 9000 dead that day.

The left wing of the French army under Marshal Ney was now fully engaged, with personal orders from Napoleon to smash the allied line. Ney ordered Kellerman (The commander of French cavalry) to commit his cuirassiers to the battle. In the midst of this charge, the French caught the British Fifth Brigade, smashing the 69th Regiment of Foot and taking it's Kings Color.

The numerical balance had now tipped in favour of the allies, and Wellington (who had only recently arrived on scene) decided to mount a counterattack. Though this attack was unsuccessful in breaking the French, it succeeded in driving them back. This allowed the Anglo-Dutch army to retreat along the Brussels road, for the Prussians had also been defeated that day and the two armies could not meet, for now.