By mid 1814, Napoleon had lost the War of the Sixth Coalition. It stemmed from his disastrous foray into Russia in 1812.  Russian troops marched into Paris, and it was all over. Napoleon surrendered, bidding his beloved Imperial guard goodbye.

Napoleon abdicated with the Treaty of Fontainebleau. After the signing of the Treaty of Paris (one of a few with that name), which formally ended the war, Napoleon was exiled to the tiny Mediterranean paradise of Elba. He retained his title of Emperor, albeit only of Elba. He was allowed to bring with him roughly 1000 loyal followers. Initially, Napoleon seemed happy to live out his days on Elba, though his wife, Marie Louise, and his son, the King of Rome, were not with him. 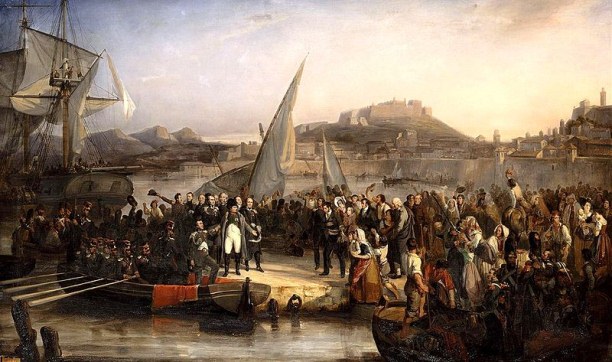 Elba is roughly seven miles off the western coast of Italy. It is part of the Tuscan Archipelago, measuring 88 square miles. Elba was chosen as Napoleon's place of exile by the conquering hero of the day, Tsar Alexander of Russia. This was done in part to antagonise the Austrian Empire, which owned Elba, and did not want Napoleon so close to it's Italian interests.

When Napoleon arrived, Elba had a population of roughly 12000 people. It was a very poor, old, sleepy island. It imported most of it's food from nearby Italy, and the only thing it seemed to have going for it was it's iron mines. This industry lent its name to the island's capital: Portoferraio, which means, "Port of Iron". It had no proper palace for Napoleon, so he was housed in the town hall, formerly a biscuit warehouse. He eventually settled in a house on the outskirts of town. Napoleon also began to beef up the island's defences. Old watchtowers were rebuilt, and the best harbour was strengthened. A police force was established, tasked with watching all newcomers to the island. Elba became a fortress.

Napoleon did not rest. He set to work renovating his "palace", stealing furniture from Austrian palaces in Tuscany (Take that Emperor Francis). Things seemed to be going well, and Napoleon's guard on Elba, Neil Campbell, saw nothing wrong. He left one day, and would not be back for a fortnight. Napoleon saw his chance. On February 26th 1815, everything seemed routine on Elba, until Napoleon and a small gang of supporters boarded one of Elba's three naval ships, and sailed off.