Patrick Harris - April 13, 2013
The Battle of Badajoz was one of the bloodiest of the Napoleonic Wars. Napoleon had made the decision to invade Russia, and pulled troops out of Spain. The Earl of Wellington, leading a combined Anglo-Portuguese Army, took advantage of this and marched his army into Spain. The Allied army quickly took Almeida and Ciudad Rodrigo, and now they settled on a new target, Badajoz  Taking Badajoz would secure the Allied supply routes from Lisbon.

The Allied Army of 27,000 men, which outnumbered the French by more than five to one, encircled Badajoz and commenced a siege. The Allies began constructing earthworks under repeated sorties by the French, who were held off by  brave counterattacks of the 95th Rifles. Upon the arrival of 18lb howitzers, a bombardment was commenced. The light infantry of General Picton took a defensive bastion just outside the walls, and Allied trenches began snaking towards the high curtain wall of the town. By April 5th, two breaches  had been made in the wall. The Allies prepared to storm Badajoz. 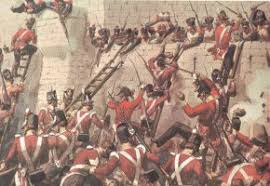 The Allies learned that Marshal Soult was marching to the Garrison's aid, so Wellington decided to launch the attack at 2200 on April 6th 1812. Just as the Forlorn Hope  (Which Richard Sharpe led in Bernard Cornwell's fictional adaptation of the battle: Sharpe's Company) was about to reach the walls, hundreds of Frenchmen appeared on the walls and poured musket fire upon the advancing Allied troops. The breach began to be filled with 2000 dead and dying Allied soldiers. The carnage was unspeakable, and Wellington was just about to call of the attack when a foothold was gained inside the city. Fitzroy Somerset, the future Lord Raglan (more about him another time) mounted the breach and secured a gate for Allied reinforcements before the French could organize a counterattack. The Allied troops swarmed the city, sacking Badajoz in revenge for their dead. The sacking of Badajoz brought about the deaths of 4000 civilians, who were the biggest losers in the battle. Order was not restored for more than 72 hours.