A further reason for the dreadnought having null effectiveness during the First World War is that dreadnought battleships were too fast, reducing the number of naval engagements. HMS Dreadnought was the fastest battleship ever made: “Her [Dreadnought’s] propulsion system was almost as revolutionary as her armament. She was powered by a combination of boilers and turbines, and although these were coal fired, they represented a significant technological advance over previous warships. It also made her significantly faster. The Dreadnought had a top speed of 21 knots (38.9 km/h)-three knots faster than the King Edward VII. While this mightn’t seem like much, it made her the fastest battleship in the world.” Konstam, Angus, Naval Miscellany, (2012) p. 76. Dreadnoughts could easily outpace the older pre-dreadnoughts, and could, as a result, evade naval confrontation, contributing to the ineffectiveness of the dreadnought in the First World War. 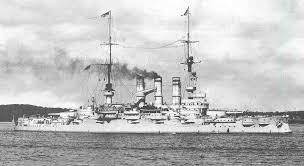 With dreadnoughts being so fast, it was possible for the German fleet to set sail, bombard an English coastal town, and be back in Kiel before the Royal Navy (RN) was even out of port. This was due mostly to the speed of dreadnoughts. This event is typified by the German bombardment of Scarborough in December 1914: “Vice Admiral Franz Von Hipper, commanding the German 1st Scouting Group, planned a raid across the North Sea against English coastal towns” Grant, Battle At Sea (2012) p. 262. Even though the British knew of this attack beforehand, they were still too slow: “The British were forewarned of this attack by code breakers in the Admiralty’s room 40.” Grant, Battle At Sea (2012) p. 262. The British were only able to get a small force out to sea, while the majority of the British Grand Fleet lay in port; “British forces sent to intercept Hipper blundered into sight of the [German] High Seas Fleet, but Admiral Ingenohl, fearing this was the British Grand Fleet, fled for home. This left Hipper exposed, yet he was allowed to escape, pursued by a token British force while the Grand Fleet was still in port.” Grant, Battle At Sea (2012) p. 262. The German dreadnoughts were extremely fast, and combined with the British idiocy, the German fleet was able to get away on this occasion and many others. The speed of dreadnoughts allowed them to escape major engagements, reducing their influence on the outcome of the First World War.